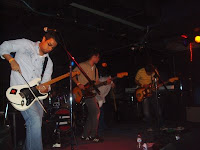 Hey, Fearless fans, SouthSide was lucky enough to support a charity event that raised money for a good cause. O.S.E.A. (Organizing Students for Education and the Arts) held a fundraiser at Subterranean to obtain their nonprofit status. O.S.E.A. is an organization which assists students on the southwest side of Chicago about the business of the arts. Through this community organization, they learn about cultural diversity, environmentalism, social awareness and building bridges within their neighborhood. Local bands like Subatomico and Lovers In Arms, lent a helping hand to support this great cause. They provided sets featuring a mixture of Spanglish music and lyrics for the audience. For more information about O.S.E.A., visit www.oseachicago.org. 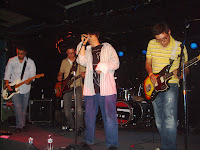 If Pink Floyd was able to tap into the dark side of the moon, then Fearless fans should check out SouthSide’s friends, Kelroy. This band tapped into the dark side of the human emotion though its music and lyrics. The audience felt as well as heard it via the mournful guitars riffs of pain and angst. Within the pain and angst, there were ominous messages worth heeding. It has been a long while since first reviewing them however they’re still rocking strong but more vibrantly than before. What SouthSide liked about Kelroy was their varied music style which took the audience from one end of the emo spectrum to another. For example, Kelroy’s opening song was instrumentally moving that wasn’t weighed down deep in sad moodiness. It was spiritually uplifting and immediately grabbed the audience’s attention. And it wasn’t all dark emo music during this set. There were subtle hints of “happier” moments too yet you need a good ear to catch it. When it reaches that “happy” spot, it will certainly fuel a fiery momentum which makes you move to the rhythm. It certainly sparked Luis (Kelroy’s front man) as he moved and hopped about on stage. It was an amazing performance compared to last year’s, Fearless fans. SouthSide highly recommends catching the dark and “happy” emo side to Kelroy at their next performance. For more information about this band, visit them at www.myspace.com/kelroymusic.

Peace
SouthSide
Posted by SouthSide of Chgo at Saturday, April 25, 2009 No comments:

Hey, Fearless fans, check out the following local bands that rocked the Elbo Room stage on April 2nd and 3rd. 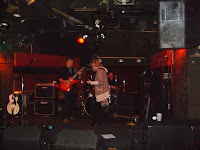 6 Degrees of Separation was given the rare chance to strut their stuff as the headlining band April 2nd. In this reviewer’s opinion, it was a sign of more good things to come for this band. So far, they shared the stage with other popular bands like Reverie, Red City and (A)bakus. Though their music doesn’t come with fancy peddle-board sounds and effects, it does pack a lot of guitar riffs and rhythms. It’s the type of music classic rock fans truly would like. Carefully listen to 6DOS’ lyrics and you’ll hear the spirit of 60s movement alive and well. SouthSide suggests checking out Cruel Nation. The message for more social awareness is still needed today as it was back then. Featuring other classics like Seven and Wake Up, the band debut a new song, The Healer. 6DOS rocked out the venue with hard guitar riffs and rhythms. SouthSide liked how this song allowed the band to branch deeper within their rock genre. It was another fine performance as the headliner. This reviewer hopes to see more of them in this role soon. For more information about 6 Degrees of Separation, visit them at www.6degreestheband.com or www.myspace.com/6degreestheband. 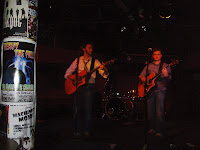 Whenever SouthSide sees this guitar duo, she’s reminded of the indie version (Paul) Simon and (Art) Garfunkel. On April 3rd, The Real Jane Martin brought that singer-songwriter to life on stage during their performance. Performing songs off their latest EP, Simple Math, it was an acoustic set with an electric feel when necessary. SouthSide enjoyed how their songs were touching and personal. For example, listen to Sarah, a song about building up self confidence and esteem. The audience was moved by the powerful emotions off the lyrics. Or take, 9 Miles, returning to hometown for better or worse, that had a soft mandolin rhythm within the song. SouthSide liked their co-written song, Looking for Jane, which gave this reviewer the impression she doesn’t want to be found. The Real Jane Martin closed out the set with a fun cover rendition of Madonna’s Crazy for You. It was more upbeat than original and included some audience participation too. For more information, visit this duo at http://www.realjane.com/ or www.myspace.com/realjane. 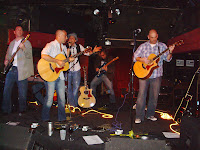 The unique five-guitar arrangement of this band drew out the alternative rock sound in this band’s music. Supra Genius simply impressed this reviewer with their versatile tone of country to bluegrass during the set. She liked how the lyrics painted a storytelling picture within the songs. The music was full of simple and danceable rhythms that some in the audience moving to the beat. The highlight of Supra’s performance was a fantastic cover of The Beach Boy’s Sloop John B. Their rendition had more of an Americana feel though more was needed to hear the backing vocals. New song, Separated by Lies, certainly rock out the stage on a momentous high. However in SouthSide’s opinion, the audience was somewhat too laidback to fully savor the angst in the vocals. This reviewer enjoyed the country tone in Interstate before closing the performance with Get It Together. Supra Genius, Fearless fans, provided a unique and intimate experience during their performance. SouthSide highly recommends checking out their next show. For more information about Supra Genius, visit this band at www.myspace.com/suprageniusband.

Peace
SouthSide
Posted by SouthSide of Chgo at Saturday, April 25, 2009 No comments:

SouthSide On the Town


Hey, Fearless fans, for one night only SouthSide went emo! That’s right it was techno/electronica at the Darkroom with Faith Assembly and Moulin Noir. The venue itself lived up its name creating the perfect atmosphere for the featured performances. However the lack of audience attending this spectacular show was very discouraging for this reviewer. Actually, this show was better suited for the weekend crowd instead of a Monday. Still that didn’t stop the few who did from partying in their fashionable emo wear. 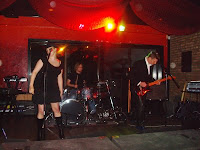 Though, it showed they haven’t performed in Chicago in a long time, Faith Assembly managed to pull off a decent performance. It was a stimulating mixture of ambient, techno and rock wrapped inside the band’s music. This reviewer felt the rhythm and harmonies brought to life by Mark’s and Laura’s vocals in each song. The vocals complimented the other wonderfully in creating that sensuality and sexiness experienced from the performance.
Opening with Crash and Burn, Faith Assembly’s sound instantly had SouthSide swaying to the soft rhythms and vocals. Yet it was Red Ambition and Phantoms that this reviewer enjoyed the most about the set. She noticed during these songs Mark would be more passionate and vocal while singing without the guitar. He exposed his deepest feelings and had his personality shine through his voice. Plus it gave him more freedom to move about the stage and interact with female vocalist. 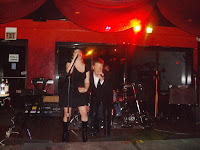 Both songs created a fiery momentum with the audience that it had them entranced to the music. Faith Assembly performed a fan fave, Cascade, before closing their performance with Carry Me. This song was sensual, subtle, sleek and sexy – very hot to the senses. The slow and steady tempo perfectly lulled the dancers to feel each beat of the music.
Yes it was a mind blowing experience to feel such sensuality within music. This reviewer recommends catching their next show in Orlando, Florida on April 12. For more information about Faith Assembly, visit them at www.faithassembly.com or www.myspace.com/faithassembly.

Peace
SouthSide
Posted by SouthSide of Chgo at Wednesday, April 01, 2009 No comments: