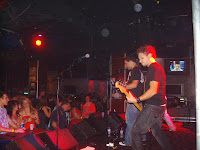 It’s hot fun in the summertime, Fearless fans! The summer music season is high gear with lots of reviews planned throughout the month of July. From the Double Door to Elbo Room and Metro, SouthSide will be there covering Fearless bands rocking the stage. On this particular night, she was hanging out at Cubby Bear for some baseball, UFC 100 fighting and music by Contriband, Jimi Falls and From The Broken. SouthSide highly recommends checking out the electrifying guitar rock of Jimi Falls. Guitar fans will enjoy the fast paced changing cords and rhythms that had heads banging to the music. This band certainly blew away plenty of ears too with their energetic instrumentals. Jimi literally lit the stage on fire especially during their American Woman cover. This reviewer suggests listening to I’m Not Falling and Machine Head. For more information about this hot guitar band, visit Jimi Falls at www.jimifalls.com or www.myspace.com/jimifalls. 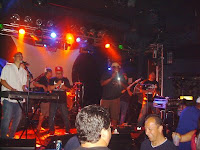 The mood at the Cubby Bear was set on party. And Contriband was the perfect opening act to keep that spirit going. When they got things rolling with Van Halen’s Jump, this totally kicked the tone of the show into high gear. Their funky fusion of hip hop, Latin and rock music had this crowd dancing nonstop from beginning to end. SouthSide enjoyed their rendition of the classic 80s hit by Hall and Oates’ song, Maneater. Dedicated to those cougars on the prowl, it was a fun and danceable number that had some singing along with the band. They entertained the crowd with their fast lyrical verses in their originals like The Sound and Chatroom. However the highlight of the night was when Contriband did a tribute to the King of Pop. Their rockin’ version of Rock With You was an excellent choice to remember Michael Jackson. If you’re a fan of the hip hop and rock fusion, SouthSide highly recommends checking out Contriband …and be prepared to party all night with this band. For more information about Contriband, visit them at
www.contriband.com or www.myspace.com/contriband. 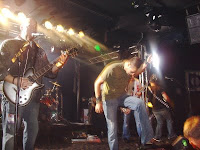 Headlining tonight’s exciting lineup was SouthSide’s wild and rockin’ friends, From The Broken. The volume was cranked up for their set as they opened with Nobody’s Perfect. This was to ensure everyone savoring each riffs during the instrumentals. It was more head banging music, Fearless fans, that totally kept the crowd energized. And for you metalheads, there was some screamin’ angst venting frustration and anger in certain songs. From The Broken also performed an extra special treat for the Cubby Bear crowd. The band saluted the life and music of Michael Jackson with their rendition of Beat It. This song absolutely had the crowd going wild in frenzy dancing and singing around the venue. Not only that, there were periods of crazed moshing and slam dancing during this performance. SouthSide had a good time watching the crowd feeding off the rockin’ vibes of this band and vice versa. The highlight of the night came when From The Broken did CCR's Mississippi Queen. This reviewer enjoyed how they flipped the original backwater blues rock tone to a more modern rock with a metal edge in the sound. It was, Fearless fans, was totally awesome! From The Broken’s wild night came to end when they performed a finale like other. Holy Driver closed with a spectacular display of stage lighting and rock music that had fans screaming for more. Whew what a night! Rock fans, unite and check out this band at their next performance happening soon. For more information about From The Broken, visit them at www.myspace.com/fromthebroken.

Until next time, Fearless fans, support your local artists and music.

Peace
SouthSide
Posted by SouthSide of Chgo at Thursday, July 23, 2009 No comments: